Do you believe that rattlesnakes can chew bubblegum? Well, Joe Hayes says he met a gum-chewing rattler when he was growing up in Benson, Arizona, in the desert of Sonora. His mother, when he told her the story, certainly didn’t believe him. She thought he was telling her one his tall tales. You know, the kind of story that’s been stretched so long it doesn’t seem right. But Joe keeps telling the story and kids keep laughing. 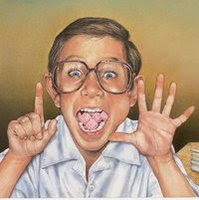 And some of them believe every word he says—especially the first and second graders. But the older kids, they scratch their heads and wonder if a rattlesnake can really blow a bubble. Just like his mother did long ago before Joe got so tall.

Here is Miriam Sagan's review of The Gum Chewing Rattler in the New Mexico Magazine (April 2007): 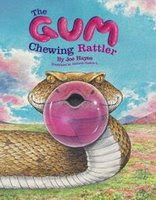 Storyteller Joe Hayes is deservedly famous for his tall tales. Take The Gum Chewing Rattler. It starts with the young Joe, growing up in Arizona, just loving to chew bubblegum. Of course, this habit was loathed by his teachers and even his mother, who hated the fact that he forgot to take the offending gum out of his shirt pocket before washing.

But one day, something happened to change all that. Joe meets a rattlesnake. In fact, he steps right on the rattlesnake's tail. Rather than spoil what happens next, you'll just have to read The Gum Chewing Rattler. Suffice it to say, a heroic struggle ensues, with Joe's life saved by the bubblegum. Do you believe it? Well, Joe's mother didn't either.

Cinco Puntos Press has long been producing some of the liveliest Southwestern children's books around. This one is enhanced by dynamic and colorful illustrations by Antonio Castro L., who also is a muralist. His illustrations of a rattlesnake blowing pink bubbles are memorable, as is the story. The book is sure to become a "read it again" favorite.