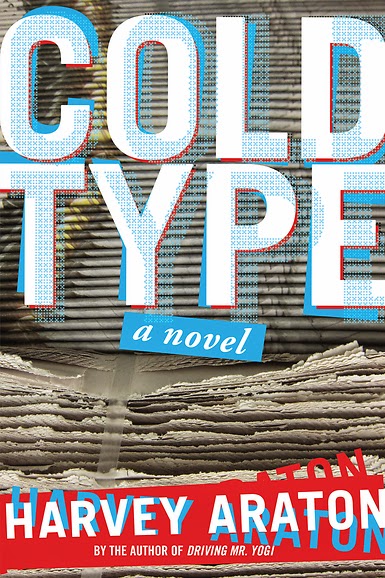 "Father and son face their demons, each other, and a depressingly realistic publisher in a newspaper yarn that made me yell 'Hold the Front Page' for Harvey Araton's rousing debut as a novelist.”
—Robert Lipsyte, author of An Accidental Sportswriter

NPR commentator Frank Deford on Cold Type: “Harvey Araton writes, with keen insight, of a time when power was ebbing fast from both newspapers and their unions. It's an especially bittersweet tale he tells of the people who had grown up in newspapers and unions, as they struggle to adapt to this evolving new order. And, of course, what makes this even more evocative, is that we're still trying to sort this all out.”

Harvey Araton is no coward. Nationally recognized for his New York Times sports journalism and columns, plus his non-fiction best sellers (Driving Mr. Yogi and When the Garden was Eden), he decided to jump headfirst into his first novel.

Cold Type is a wonderful story of family and finding one’s identity in the midst of economic distress. The newspaper labor strike that drives the book’s conflict feels remarkably fresh, even two decades later. Why? The newspaper industry is again in turmoil and technological change still threatens jobs. Men who created their wealth in other industries see that disruption as an opportunity and are buying up failing newspapers. Jeff Bezos, whose Seattle startup lurks in the background of the chaos of Jamie’s life, just completed his purchase of the Washington Post not too long ago. Change is surely on the horizon, and change is not easy.

As in Arthur Miller's Death of a Salesman, son and his father struggle to hold onto what they think is right. It's mid-1990s; and "cold type" technology, a.k.a. computerized typesetting, wreaks havoc among workers in the newspaper industry. A wealthy Briton buys the New York City Trib (Rupert Murdoch, anyone?) and immediately refuses to negotiate with the truck drivers' union. In solidarity, all the other blue collar unions take to the streets. Jamie Kramer is a reporter for the Trib. His father is a hardcore shop steward (unusual for a Jew in Irish-dominated unions) from the old day of "hot type," but who has become a typographer in a world he doesn't understand. His father expects Jamie not to cross the picket line. It would be an act of supreme disrespect. But that's not so easy for Jamie. His marriage has fallen apart, he desperately needs his paycheck for child support, and he needs to make his own life outside the shadow of his father.

"Father and son face their demons, each other, and a depressingly realistic publisher in a newspaper yarn that made me yell 'Hold the Front Page’ for Harvey Araton's rousing debut as a novelist."  --Robert Lipsyte, author of An Accidental Sportswriter

"I’ve been waiting almost 25 years for something good to come of the Daily News strike. Now it has. But this wonderful novel captures more than a time and a place. Harvey Araton deftly turns the picket line into a metaphor for other divides, for those that separate journalism and commerce, heroes and goats, and most of all, fathers and sons. Cold Type is a love song to the real New York."  --Mark Kriegel, author of Namath

"A gripping narrative and an insightful take on family, work, what loyalty means—and what it costs. Harvey Araton is a skilled writer who knows his way around the milieus he travels in this novel, whether it’s a newsroom, a labor hall or a living room. But what really makes this worth reading is the heart you can feel beating underneath it all.”  --Brad Parks, author of The Player

"Fans of Harvey Araton’s lively, engaging prose will love this vivid and heartfelt exploration of what it means to be a journalist, a son, a father, and a man."  --Pamela Redmond Satran, author of Younger

"Araton knows newspapers and knows New York, and in his seventh book (and first novel), he explores clashes more personal, more searing, more universal than any of the sports stories he's told before. Cold Type is a tale about collisions: between generations, between classes, between different crafts in a rapidly changing economy, between the past and the future, between father and son…one of the freshest surprise endings.”  --Kirkus Reviews


"For his fiction debut, he’s mined what he [Araton] knows best—newspapers….If you like the movie The Paper, you’ll want to read this." --Billy Heller, The New York Post, "This Week’s Must-Read Books"

HARVEY ARATON is a celebrated sports reporter and columnist for the New York Times. He is the author of the New York Times best seller DRVING MR. YOGI: Yogi Berra, Ron Guidry, and Baseball’s Greatest Gift and WHEN THE GARDEN WAS EDEN: Clyde, the Captain, Dollar Bill, and the Glory Days of the New York Knicks, which has been adapted for an ESPN “30 for 30” film to be broadcast this Fall. Araton is an adjunct professor at Montclair State University in New Jersey where he lives. Cold Type is his first novel.

COLD TYPE is available in cloth, paper and as an e-book. Cinco Puntos Press is distributed to the trade by Consortium Book Sales and Distribution. You may buy a copy from Cinco Puntos Press, a Proud Indie!, here, or from your favorite retailer or e-tailer.