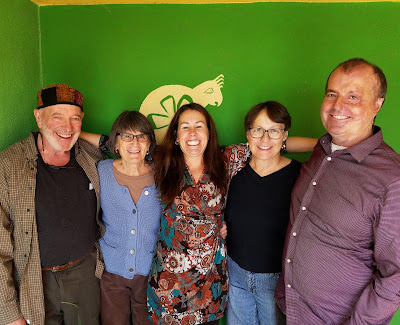 Cinco Puntos Press co-founder Bobby Byrd is stepping away from his leadership role at the independent publishing company, headquartered in El Paso, Texas. Bobby will serve as Publisher Emeritus, developing special projects, collaborating with staff as needed, and spending his extra time being a poet. John Byrd will become the company's President and Chief Financial Officer. Co-founder Lee Merrill Byrd will continue to serve as Publisher and Editor-in-Chief, building on Cinco Puntos' tradition of publishing award-winning books for children and adults.

John says, "I'm really happy to announce these changes at Cinco Puntos. They come at a time when my parents are able to teach and share their well-earned institutional knowledge. This will insure the company maintains its tradition of groundbreaking publishing while incorporating new ideas and talents. We think the authors, illustrators, publishing partners and clients we work with will be pleased to see this foundation for an orderly succession plan, growth and continued success."

In 1985 Lee and Bobby Byrd founded Cinco Puntos Press in their home in the Five Points neighborhood of El Paso. They shared responsibilities as co-publishers, producing well over 200 books and receiving national acclaim for their work. Cinco Puntos Press has been a leader in publishing bilingual books for children, many of which have become classics. They have published prize-winning novels for both teens and adults. Their list is nationally recognized for its political and social justice emphasis, which they attribute to being at home on the U.S./Mexico border. In 2005, among many other awards over the years, Lee and Bobby each received the prestigious Lannan Fellowship for Cultural Freedom for their courage and excellence in publishing.

John Byrd first officially joined Cinco Puntos as Financial and Sales Director in 2004. However, he grew up helping out by packing books when the office was based in the Byrds’ home in the Five Points neighborhood.